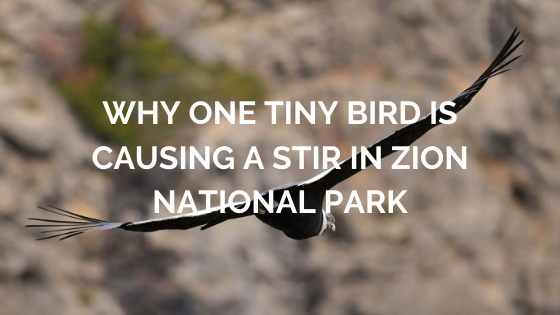 For the past few weeks, crowds have been forming at the Zion Canyon Shuttle stop number 8, also known as Big Bend. Ride the bus there, and you’ll find rangers armed with spotting scopes, talking to visitors. And you might also notice at least a few people looking up.

That’s because the shuttle stop has become the gathering point for tourists and wildlife enthusiasts hoping to catch sight of the new baby California Condor who is living below Angels Landing with his parents in an oversized nest.

If you aren’t familiar with the long history of California Condors, waiting around in hopes of catching a glimpse of this tiny bird might seem like an odd way to spend your time in the park. But keep reading and you’ll learn why this special little bird is so important. 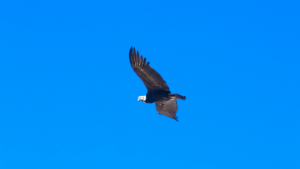 A History of California Condors in the Wild

The California Condor is the largest flying bird native to North America. With a wingspan that can reach 10 feet, these massive birds are at home on the cliff faces and mountains of the American Southwest, where they build their nests high up so that they can more easily soar from them. But while the American Southwest may now be their only territory, this massive bird once called much more of the nation home, with a habitat reaching to New York, Florida, Mexico, and even British Columbia in Canada.

Hundreds of years ago, the California Condor likely numbered in the tens of thousands. But for the last century, the species has been under attack from a number of sources. Early settlers hunted or captured these birds. Their territory shrunk as cities and towns were built. Lead-shot in rifles used for hunting also led to their rapid demise, as the Condor is a carrion bird, so it feeds on carcasses, including those who had been shot. The lead shot in the bullets proves fatal when the Condor eats meat that has been tainted.

Later in the 1900s, other threats, like wind turbines and the use of pesticides, further reduced their numbers. By the late 1980s, there were less than 30 known California Condors alive in the wild.

With the species’ numbers now critically low, experts stepped in. They took the remaining Condors into captivity, placing them in a carefully managed breeding program in both the Los Angeles Zoo and the San Diego Wild Animal Park. The species was officially extinct in the wild.

The program was a huge success. As the animals bred, they were slowly released back into the wild. Today, there are more than 500 California Condors living in the American Southwest.

Why the New Hatchling is so Important

While the California Condor has made a strong comeback in the Southwest, they didn’t have a strong presence in Zion National Park. Many Condors lived in or passed through the park. Some even built nests and laid eggs. But there had yet to be a baby Condor that made it past the fledgling stage, when they first fly from the nest.

In fact, the mother of the newest hatchling had laid eggs in the past. Not only had they passed away, but her previous mate died after ingesting lead.

When rangers first began to notice behavior changes in the mother and father Condor in early April of 2019, they were hopeful. The suspected parents began staying closer to the nest, constructed below Angels Landing. This indicated that they likely had an egg.

There was an egg, and by May, experts believed that it had hatched. It would take until September 25th for the young bird to mark the most important milestone; leaving the nest. A lucky group of visitors witnessed the flight, and park biologists confirmed the sighting later in the day.

Not only was the hatchling the first to leave the nest in Zion National Park since the species went extinct in the wild, but he or she is also the 1,000 Condor born since the rehabilitation program began. The Condor chick actually left the nest fairly early. On average, Condor chicks fledge when they are between 4 and 6 months old. Condor 1,000 was only barely 4 and a half months old.

If you have a visit planned for Zion in the coming weeks, you should plan a visit to Shuttle stop 8 to try to catch a glimpse of this incredible bird. Rangers are on-site to answer questions and to remind visitors how important it is to not disturb the chick, the new parents, or the nest. Several trails around Angels Landing also remain closed at this time, to prevent unnecessary disruptions to the nest.

Another way you can do your part to protect this species is by never offering food or leaving scraps behind that the birds may feed on. Human food not only lacks the nutrition they need, but feeding can affect their ability to scavenge for food on their own. If you choose to hunt in the region, or anywhere in the Southwest, use lead-free ammunition to prevent accidental lead poisoning.

Looking for other cool things going on in Utah’s national parks? Check out this list next.